I am getting picked up in about an hour to head to the airport. My flight is at 2:35 am so I thought I would try to sneak in one more post before I fly out or at least start it and finish it off at the airport.

Today was Taj Mahal day - let me first say that I am happy that I visited it but would not do it again, only because it took 4 hours each way (which I did know ahead of time). Next time, I will reserve that time for more shopping! Anyway, the day started out with a quick breakfast downstairs with my usual breakfast buddy shortly joined by his "I'm not a morning person" partner - you know I say that lovingly! We then headed out to pick up the Greek-Oz couple and started our long journey to the Taj Mahal. Along the way, we did do one quick pit-stop for a snack and washroom break.

When we arrived in Agra, we picked up a tour guide, Jack - aka Alf - near the entrance of the Taj Mahal. Gas cars are not permitted near the TM so we parked and was taken closer to the TM via an electrical open vehicle. He advised us to take only our mobile phones, cameras (we read video cameras were not allowed but signs at the TM indicated otherwise), wallets, and water and leave our bags behind. We gave 750 rupees each to the tour guide - price of an individual ticket - plus 200 rupees as a group for such things as tips to others or something like that. He returned with tickets (which we should have asked for at the end as a souvenir) and bottled water for each of us. When we arrived at the TM, he advised us to ignore all vendors because they were not "government-approved". We went through a security check and started our tour.

Alf was very knowledgeable and he held my attention as he told us the story behind the TM. There are photo opportunities along the way; however, you cannot take photos in the actual TM. Prior to going into the TM, he had someone put on shoe covers for us - we tipped him. Overall, it was a beautiful place - I have attached two photos at the end of this post. After that, we went to a "government-approved" shop - I bought a traditional outfit for my son as well as my mom. Prices were OK - could do better at the M-block market I believe but prices still relatively cheaper plus there were some items that you could only buy there (e.g., souvenirs related to TM). I would still recommend checking it out. As usual, if you show interest, they are open to price negotiations. After that, we were pretty hungry so we grabbed something quick at KFC before starting our journey back to the hotel at 3:30pm. We all are looking forward to eating non-junk food when we get back to our usual lives! By the way, Jack was very motivated to get a tip but too aggressive in his approach. We did give him something because he started to hang around waiting for a tip - we sensed he wanted more. To each his own, but this type of aggressive tip-seeking left a negative taste in our mouths. But I will add our driver was great - he had major skills on the crazy roads and traffic. I believe there are invisible lanes and lines that only Indian drivers, bikers, motorcyclists, and pedestrians can see!

Anyway, on our journey back, I received an email from the clinic - they have been trying to get a hold of me at the hotel and on my cell phone but I was out of network range. Apparently, my surrogate was having some "vaginal discharges" so Dr. S recommended another surrogate. I was happy with the replacement - mid-30s, a proven surrogate, and married with children. I wasn't really concerned except they wanted me there at 4pm to sign the revised contracts, which was not possible given our current location. However, they were more than happy to wait for me. We ended up being there around 7pm, thanks to our super driver! I signed the contracts quickly and headed back to the hotel. There, I scheduled a ride to the airport with our driver, rested up, and took a shower before meeting up with the Aussie boys and the Greek-Oz couple again for dinner. The Aussie blokes who we had recently met at the ISIS Hospital also joined us.

After dinner, we said our goodbyes - for sure I will keep in touch with the Aussie boys and Greek-Oz couple. You guys made this trip so easy and fun! Off to the airport now so will post once I get settled back home. I have missed my son big time so look forward to seeing him again!

Thank you for letting me share this part of my world with you! 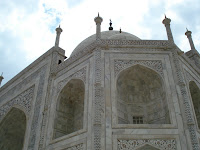 Posted by Chindian Dreams at 10:20